How I Met Your Mother Wiki
Register
Don't have an account?
Sign In
Advertisement
in: Characters, Girls who dated Ted, The gang's co-workers,
and 4 more

View source
watch 02:07
Spider-Man: No Way Home Trailer Dropped - The Loop
Do you like this video?
Play Sound

Becky was Robin's co-anchor at Come On, Get Up New York!. She's engaged to George Van Smoot.

Becky became Robin's co-anchor at Come On, Get Up New York! after her predecessor Don Frank took another job. She first arrived with promises not to steal Robin's thunder but it quickly became apparent that her perky nature and exuberance were overshadowing her co-host. (Subway Wars)

Becky is an incredibly childish woman, reacting to events in life with the same enthusiasm of a five-year-old. Although Ted initially likes her because she makes him feel needed, which he adores, he realizes all too soon that Becky is, in almost every way, identical to a five-year-old. Her childish behavior stretches to the point where he buys her huge ice-cream cones and ties her shoelaces in an effort to keep her happy. When he sees a father doing the same thing with his daughter, Ted decides to break up with her. (Baby Talk)

She's not above taking other jobs that Robin would consider demeaning to help promote her image. She did a commercial where she danced and chanted "Boats! Boats! Boats!" which ended up making her even more popular and led to Robin attempting to do her own commercial with disastrous results. (Canning Randy)

It is revealed in The Ashtray that after his break up with Zoey, Ted dated Becky again for a while. They also shared a "sandwich" together. However at this point The Captain was already in love with her, indicating they had perhaps met by this point.

In Daisy, it is revealed that Becky is engaged to The Captain. She appears to have matured in personality by this final appearance. 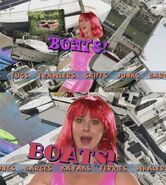