How I Met Your Father

How I Met Your Father

How I Met Your Father is an American sitcom created by Isaac Aptaker and Elizabeth Berger which premiered on January 18, 2022 on Hulu. It is the standalone sequel to How I Met Your Mother. The series, which stars Hilary Duff, Chris Lowell, Francia Raisa, Suraj Sharma, Tom Ainsley, Tien Tran, and Kim Cattrall, follows the main character, Sophie (Duff), and her group of friends in New York City's Manhattan. As a framing device, Sophie (Cattrall), in the year 2050, recounts to her unseen son the events that followed meeting his father in January 2022, and how they ultimately had him. In February 2022, the series was renewed for a second season.

Set in the near future in 2050, the show follows Sophie telling her son the story of how she met his father back in the year 2022, when Sophie and her close-knit group of friends were figuring out who they are, what they want out of life, and how to fall in love in the age of dating apps and limitless options. Sophie also tells her son about all the obstacles she had to go through before she ends up with his father.

Following the production of the 2014 CBS pilot How I Met Your Dad, which did not move forward, on December 14, 2016, it was reported that Isaac Aptaker and Elizabeth Berger were set to write a new version of the previous spin-off's pilot, re-titled How I Met Your Father, with Carter Bays and Craig Thomas serving as executive producers. It was later announced that, after signing new contracts with 20th Century Fox Television that would see both Aptaker and Berger being promoted to executive producers and co-showrunners on This Is Us alongside Dan Fogelman, the idea would be put on hold until further notice.

On August 8, 2017, Fox chairman Dana Walden told Deadline Hollywood that 20th Television were attempting a spin-off with different writers, for the third time. Three days following the announcement, Deadline reported that Alison Bennett would write the spin-off, with the same title as the previous attempt with Aptaker and Berger. It was also learned that Bays and Thomas were once again hired as executive producers. This attempt also fell through.

On April 21, 2021, the spin-off series titled How I Met Your Father was given a 10-episode series order by Hulu. Aptaker and Berger serve as creators, writers, and executive producers while Hilary Duff will serve as a producer. 20th Television is involved with producing the series.

On June 24, 2021, Pamela Fryman joined the series as an executive producer and to direct the pilot. The series was scheduled to be released on January 18, 2022. On February 15, 2022, the series was renewed for another season with a 20-episode order.

Upon series order announcement, Hilary Duff was cast to star. On June 16, 2021, Chris Lowell joined the cast as the male lead. In August 2021, Francia Raisa, Tom Ainsley, Tien Tran, and Suraj Sharma were cast in starring roles while Brandon Micheal Hall was cast in a recurring role. However, a few weeks later, Hall exited the role due to a scheduling conflict and Daniel Augustin was cast to replace Hall. The next day, Josh Peck and Ashley Reyes joined the cast in recurring roles. On November 5, 2021, Kim Cattrall was cast in a recurring role as the future version of Duff's character Sophie.

Principal photography for the series began on August 31, 2021. 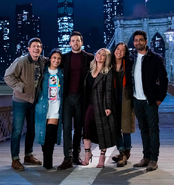 How I Met Your Father - Trailer