This running gag was first introduced in Slapsgiving where Ted and Robin would mock others e.g. General Knowledge, Corporal Punishment, Colonel Stuck-in-my-Teeth, etc.

Future Ted reveals that when he and Robin were dating they had a private joke where they would salute whenever another person used a military rank before another in a sentence (an example being 'Major Payraise'), but since breaking up simply share awkward looks whenever someone does it. Later, over the dinner Bob used the phrase 'Major Buzzkill', causing Ted and Robin to salute without thinking. As everyone tidies up from the dinner Ted notes there's going to be a 'major clean-up' making everyone unknowingly salute. They end up wondering if they'll be doing it all the time, which Robin responds with it being the "general idea," making everyone salute again.

Ted and Robin are talking about their "private thing" and salute.

The gang talks about major baggage and Ted and Robin salute.

When Lily talks about Ted and Robin being platonic they salute several times.

Ted and Robin salute each other during Ted's goodbyes to the group, saying it's been a "major pleasure."

In a deleted scene Robin says to Ted that she doesn't have any major problems. As Ted walks out he turns to Robin and salute. [1] 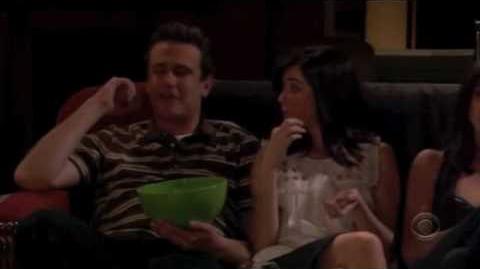 General Knowledge
Add a photo to this gallery

Retrieved from "https://how-i-met-your-mother.fandom.com/wiki/Mock_Salutes?oldid=168573"
Community content is available under CC-BY-SA unless otherwise noted.