Ranjit is a former New York Taxi driver from Bangladesh, currently occupied in the profession of a limo chauffeur. Yet he does not have a driver's license.

Ranjit has maintained a good relationship with each of the main characters since his first appearance and has a cheery disposition. (Pilot)

Ranjit drives the main characters around on a few occasions and, on one occasion, drinks champagne with them in MacLaren's bar. He also drives the limo right after Marshall and Lily are married.

His wife's name is Falguni, who is seen when Marshall and Lily invite Ranjit and her for a double date. (The Sexless Innkeeper) 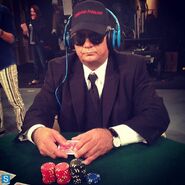 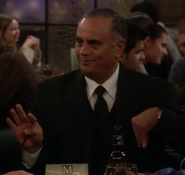 Add a photo to this gallery
Retrieved from "https://how-i-met-your-mother.fandom.com/wiki/Ranjit_Singh?oldid=173944"
Community content is available under CC-BY-SA unless otherwise noted.