"One of New York's grandest old hotels. In its heyday, it was the New York home to kings and queens. But lately...mostly just queens."

The Arcadian was an old hotel in downtown Manhattan designed by John Clifford Larrabee. It was torn down to make way for the new GNB headquarters. (Challenge Accepted)

The Arcadian is based on the Hotel Pennsylvania.

The building, years after its time, became a home for mostly drag queens. Because of the Arcadian's architectural significance, Zoey Pierson spearheaded a campaign to protest it being torn down by GNB. The real reason for Zoey campaign is revealed in The Perfect Cocktail, when she tells Ted that she once lived there with her family at The Arcadian and doesn't want to lose all those good memories.

In a desperate attempt to save the Arcadian, Zoey shared her recording of Ted bashing GNB and calling the lion-head stonework "iconic", convincing the New York City Landmarks Preservation Commission to declare it a landmark. However, the night before the proclamation, the gang schemed with Arthur Hobbs to steal the stonework. The Landmarks Commission then denied the motion to make the Arcadian a landmark, and the demolition went through. (Landmarks)

The Arcadian was first mentioned in the episode Subway Wars when Ted is pointing out major New York landmarks, he points out the window and tells the driver to look at "the Arcadian Hotel".

The Arcadian being demolished 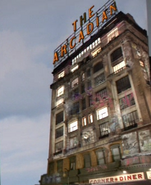 Retrieved from "https://how-i-met-your-mother.fandom.com/wiki/The_Arcadian?oldid=174217"
Community content is available under CC-BY-SA unless otherwise noted.